Warning: Use of undefined constant DATABASE_SERVER - assumed 'DATABASE_SERVER' (this will throw an Error in a future version of PHP) in /nfs/c10/h05/mnt/227559/domains/scopechautauqua.org/html/wp-config.php on line 30
 un-SAFE Act – ScopeChautauqua
↓ Skip to Main Content
Home › un-SAFE Act

What do you really know about the “SAFE Act”? 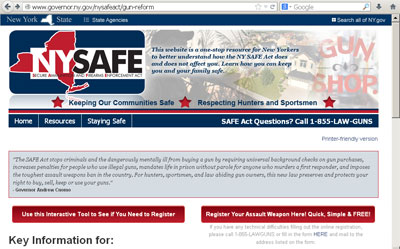 Click on the above webpage image to visit the SAFE Act gun reform webpage.
To quote Governor Cuomo “The SAFE Act stops criminals and the dangerously mentally ill from buying a gun”
Really? Since when do most criminals actually make purchases from the local gun store or a gun show? Criminals prefer to purchase guns from other criminals who probably stole them in the first place and thus make them harder to trace.
Criminals are not looking for a really nice hunting or sporting gun or some nice collectible to display above the mantle. Criminals prefer the cheap “Saturday Night Special” type of gun. 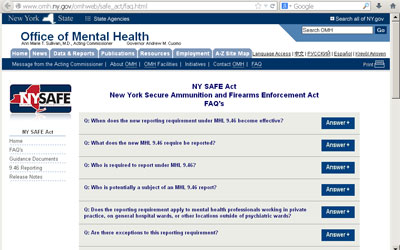 Click on the above webpage image to visit the NY Office of Mental Health FAQs webpage.
Check out the FAQs and see how the state believes that the privacy between you and your Doctor no longer exists. Perhaps you get super nervous about flying and get a prescription to help you fly to your vacation destination. Now the state thinks you need to have your gun rights investigated and possibly take away all your guns. This has already happened. How many people who need some serious mental help will now decide not to seek help? 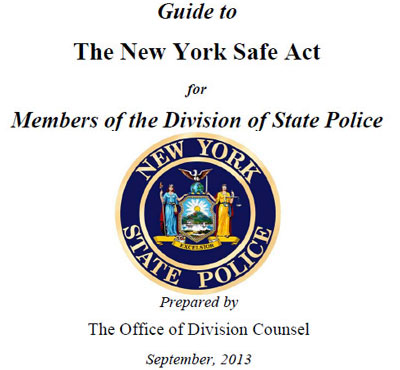 Click on the above to read/print the New York State Trooper’s SAFE Act Field Guide.

Click on the above to link to the New York State Sheriff’s Association’s response to the SAFE Act.

The New York Secure Ammunition and Firearms Enforcement Act of 2013 commonly known to many of us as the “un-SAFE Act” is a gun control law in the state of New York.

The law was written in response to the Sandy Hook shooting in Connecticut. Governor Cuomo hurried the law along in order to beat Obama to the punch. Cuomo wanted to see himself as a front runner in the 2016 Presidential elections